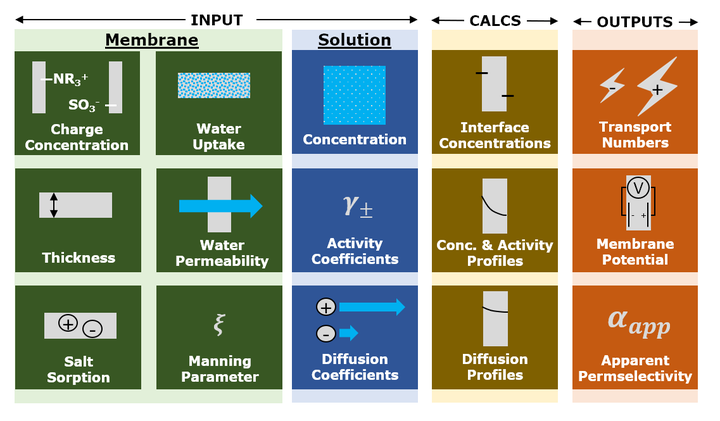 Electrodialysis, reverse electrodialysis, and related electrochemical processes are increasingly important technologies for water purification and renewable energy generation and storage. The electrical efficiency of these processes is directly related to the permselectivity of the ion exchange membranes (IEMs) – defined as the extent to which the membrane permits the passage of counter-ions (ions of opposite charge to the membrane, e.g., cations for a cation exchange membrane) while blocking passage of co-ions. Permselectivity is not a material constant, but rather depends on the concentration and composition of the electrolyte solutions in contact with the IEM. Thus, even though permselectivity is routinely measured at standardized conditions (usually 0.5 M/0.1 M NaCl or KCl), the practical utility of such data is limited because we lack an accurate, quantitative way of using it to predict permselectivity under relevant process conditions. Moreover, the concentration dependence of IEM permselectivity has historically been studied primarily by evaluating the performance of (reverse) electrodialysis stacks rather than individual membranes, which has made it difficult to relate the concentration dependence of permselectivity to specific membrane characteristics. In this study, we measured the permselectivity of four commercial IEMs in six different concentration gradients employing 4 M and 0.5 M NaCl as the high salt concentration. We then constructed a predictive model of membrane permselectivity based on the extended Nernst-Planck equation and investigated how accounting for convection and electrostatic effects (via Manning’s counter-ion condensation theory) affected model accuracy. We demonstrate that accurate, quantitative predictions of IEM permselectivity as a function of external salt concentrations are possible and require knowledge of only four easily measured membrane properties: water uptake, water permeability, charge, and thickness.